The Fed and the Bond Market

Recently, Federal Reserve policymakers surprised no one when they raised the Fed funds rate to a range between 1.25% and 1.50%. The prospect of rising rates understandably makes investors less enthusiastic about allocating capital to bond markets (since the price of bonds moves inversely to rates). However, it is worth taking a step back to consider just how far rates are likely to rise before the tightening cycle is complete and what the potential impact may be for bond portfolios. It may be that investors are a little too worried when it comes to future rate increases.

One of the most watched indicators that the Fed’s leaders provide are the ‘dot plots’ – a chart that shows where the committee members believe the Fed funds rate will be in future years. Based on the latest plots, there appears to be a general consensus that rates will be around 2.75% to 3.125% by 2020 and over the long run. This implies another 6 or 7 quarter point hikes over the next three years. However, it is important to remember that the Fed funds rate, while important, doesn’t dictate bond prices directly. In fact, over the last year, this rate was raised three times yet the rate on the 10 year Treasury Note is almost unchanged year to date.

The rate on the 10 year T-Note is more important for bond investors not only because Treasuries are fundamental fixed income investments, but because corporate bonds are priced relative to a spread over the risk-free (Treasury) rate. For this reason, changes in the rate on the T-Note reverberate across bond markets. In assessing where this rate might be in a few years, a good place to look is the Wall Street Journal’s Economic Forecasting Survey. In the December edition, the 60+ economists that participate in the survey projected an average 10 year T-Note rate of 3.38% by the end of 2020. That forecast dovetails fairly well with the Fed’s dot plot projections given the plausibility of continued flattening of the yield curve as rates march higher.

So, it would be reasonable to accept the 3.38% forecast as a fair base case for where the rate on the 10 year will be by 2020. This is worth remembering because bond investors may be too negative when it comes to the prospects for higher rates. Excessively high expectations likely stem from the long bond market rally that began over thirty years ago when the 10 year rate peaked above 15%. Investors may be viewing the bond market with this in mind and assume that, as the trend reverses, much higher rates are in store. However, looking at a very long term chart of 10 year Treasury rates provides a different perspective. 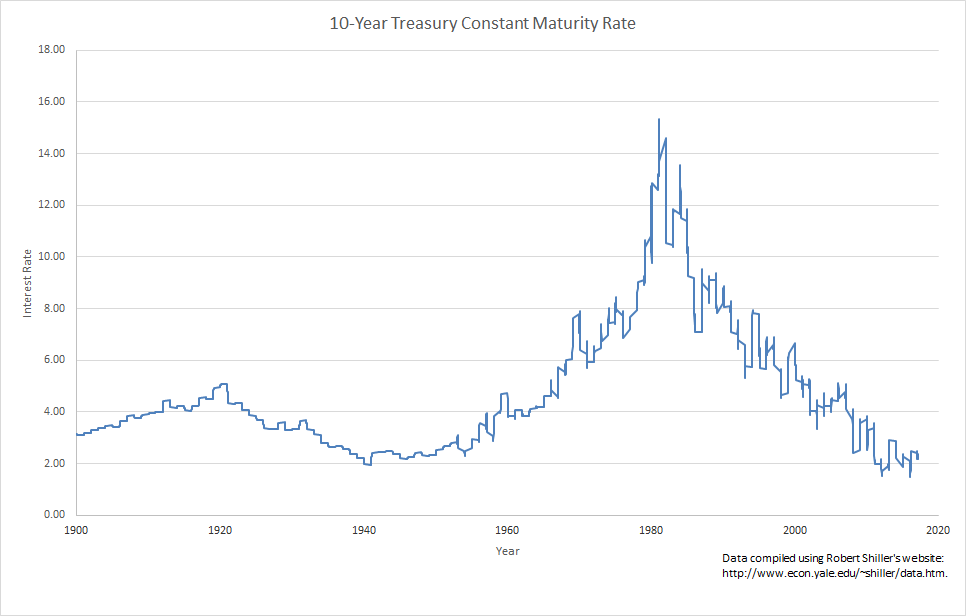 Note that for almost the first seven decades of the last century, the 10 year rate oscillated between two and six percent, and the spike in rates around the end of the 1970’s appears somewhat anomalous. Does that mean that rates can never spike again? No, inflationary shocks or a severe loss of confidence in the ability of the US government to repay its debt could cause much higher rates at some point in the future. However, as the chart demonstrates, it is possible that rates can stay range-bound for generations. Given changing demographics, low worldwide sovereign debt rates, and the deflationary impact of technological innovation, moderate rates over the long run are more likely.

Keeping this in mind, 3.38% appears to be a reasonable long-term rate. If T-Note rates were to move to that level over the next few years, there would certainly be some pain for bond investors, but it wouldn’t be too drastic. The 10 year T-Note is currently priced at 2.37%, so rates would only need to move up by around 1% over the next 3 years. While such a move would result in relatively poor performance for bond investors, it wouldn’t result in losses in most cases. For instance, if we assume that a typical bond investor’s portfolio has a ‘duration’ of 6 (which means that, for a 1% rise in rates, the portfolio would lose 6% of its value) and yields 3%, then the total return over the next three years would be around 1% annually. While this return isn’t great by any standard, it isn’t the nightmare that some are forecasting for bond markets.

Ultimately, the likely extent of rate increases is understood and relatively limited, and the potential impact for bond portfolios is manageable. Projected returns on fixed income securities appear relatively low, but high quality bonds are an important asset category that provides stability to a multi-asset portfolio and has, historically, had a negative correlation with equity markets – thereby providing valuable diversification benefits. So, while it may make sense to be somewhat underweight bonds and cautious with respect to a portfolio’s duration, investors shouldn’t overreact to the possibility for further rate increases and dismiss bonds completely.

Have questions about fixed income investing? Contact me at andrew@lpastrategic.com.

On December 23, 2022, Congress passed the SECURE 2.0 Act of 2022 which revised the rules regarding retirement saving. There are many facets to the legislation that change a variety of retirement funding processes. These...

Recently, Consumer Price Index data showed that inflation may have finally peaked. In the short run, investors are likely to focus on the trend of inflation and hope that it continues to move lower. However, even if prices moderate, it...

The Most Boring – Yet Potentially Valuable – Recommendation an Advisor Can Make